Your cart is currently empty.

A great little device that turns a two-man job into a one-man job. An electronic circuit breaker finder, which easily locates a circuit in a breaker box and makes troubleshooting electrical connections a one-person job. This device works for either circuit breakers or fuses and are very easy to use.

I expected the unit to have some trouble, since my apartment is inside of an old (>100yrs) house that's been remodeled and divided up into 4 apartments with a complete maze of wiring in the basement. The panel has an assortment of old and new breakers, including a few double breakers, and half of the stuff in there is unlabeled.

The instructions say to pass the sensor over every breaker once to "learn" and then a second time to detect. On the first pass, the unit beeped several times on various...

I love this tool. I can't begin to tell you how much time and grief (being shocked) this has saved me. For some reason, Electricians are horrible at labeling panels. They just are. Its always wrong.

In my restaurant, I have been wanting to replace a GFI that was malfunctioning in the kitchen for a while. Of course the breaker that was supposed to turn it off, didn't. I couldn't just trip breakers as we have alot of computer equipment that cant lose power.

Saved me tons of time after having my electric service upgraded. I used this in every outlet, switch and fixture so now I know exactly what circuit breaker powers everything in my house. Can be used alone for quick jobs to avoid running back and forth; or have one person at the breaker panel and another person to move the transmitter from outlet to outlet and it makes quick work of matching breakers to outlet, lights, etc. 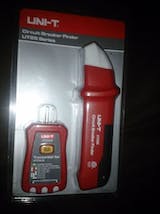 Great buy. I was skeptical that it would be accurate, let alone useful...Definitely was both of those. I had to go through 45+ breakers to map out endpoints in the house - wiring/house was about 17 years old (relatively new). Existing labeling on the breaker boxes was just about worthless - It was amazing how many receptacles where connected to "Sump Pump" and "Smoke Detectors" :\ It is also extremely easy to use. Proof of that is that I really didn't use it - my 9 year son was on point as "breaker boy"...We had facetime going, I would plug the sensor in an outlet, 10-15 seconds later, I would hear: "I think it is #...", then BOOM!...sure enough it was that one. It wasn't instantaneous to find the breaker (just incase someone was looking for that), but was definitely quicker and certainly more sane that flipping breakers one at a time, even for smaller/one-off jobs. Sooo, all in all it was: quick, accurate and easy to use - It's been a while since I've been as impressed (and surprised) with a product. I didn't get the light bulb adapter, but I imagine that might be a useful thing to have too. It is simple to use, but definitely read the directions - as I see some posts with people who might have had issues using it. 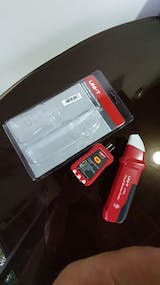 Our #1 priority here at Very Crate is your satisfaction. This means we stand by our products 100%, no matter what, no questions asked, no holds barred, no ifs, no ands, no buts. If you have a problem, we will solve it. Refund it. Send you a free replacement. Whatever it takes. Just reach out to our customer care team. We're here for you. Satisfaction. Guaranteed.